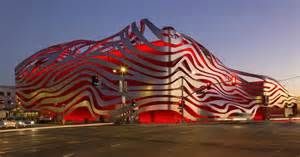 A must see in LA is the Petersen Automotive Museum.

Founded on June 11, 1994 by magazine publisher Robert E. Petersen, and his wife Margie, the Petersen Automotive Museum is owned and operated by the Petersen Automotive Museum Foundation. Previously located within the Natural History Museum of Los Angeles County, the museum is permanently housed in a historic department store originally designed by Welton Becket. The building opened in 1962 as a short-lived U.S. branch of Seibu Department Stores, before operating as an Ohrbach’s department store from 1965 to 1986. Six years after Ohrbach’s closed, Robert Petersen selected the largely windowless site as an ideal space for a museum, where artifacts could be displayed without harmful exposure to the ultraviolet radiation of direct sunlight.

In 2015, the museum underwent an extensive $90 million renovation. The building’s façade was redesigned by the architectural firm Kohn Pedersen Fox, while designers at The Scenic Route configured interior spaces to accommodate changing exhibits that are intended to encourage repeated visits. The exterior features a stainless-steel ribbon assembly, made of 100 tons of 14-gauge type 304 steel in 308 sections, 25 supports and 140,000 custom stainless-steel screws. The remodeled museum opened to the public on December 7, 2015.  Source Pertersen Automotive Museum at Pertersen.com

Cassie and I spent a great after noon at the Petersen walking the three floor of rolling art.  Amazing collection of original and professionally restored Rydes 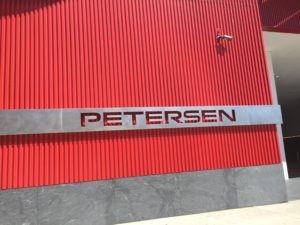 It was tough picking our favorites.  Here are just a few that made the top of my list: 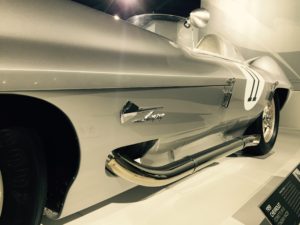