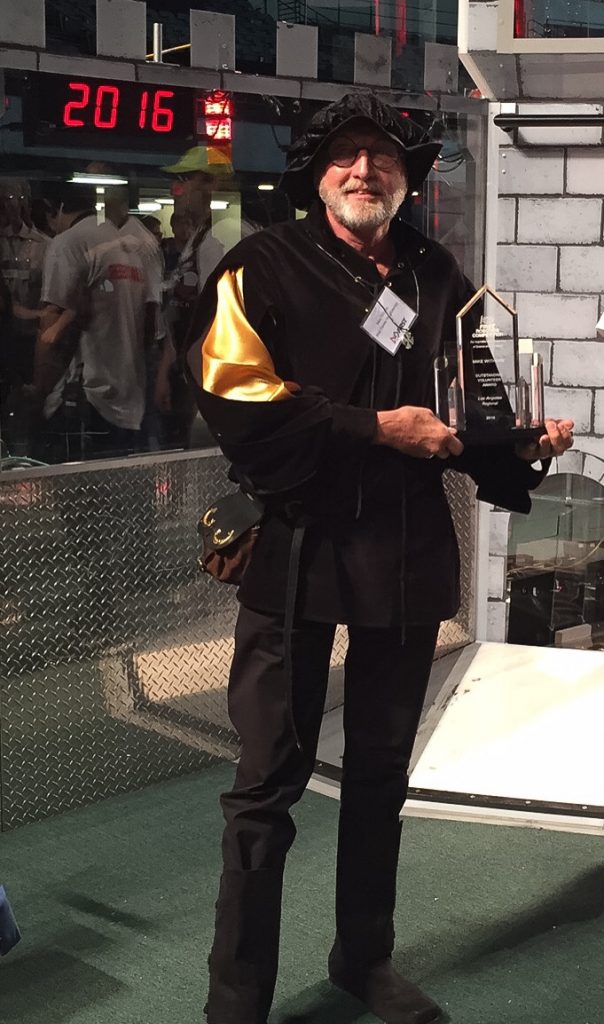 I have had an amazing year with FIRST Robotics.  As Chairman of the FIRST Robotics So. California Executive Advisory Board,  I was able to work more  closely with Walt Disney Imagineering (WDI) Leadership on strengthening and building on the Disney’s FIRST relationship.   Not only did Walt Disney Imagineering continue it’s commitment to  local team funding and mentoring, they stepped up in a whole new way.

In May WDI hosted a Blue Sky session with FIRST Leadership to share the importance of  story telling and the art of creative concept development   At the same time WDI screened the documentary  Slingshot on Dean Kamen’s (founder of FIRST) life as an inventor and humanitarian  .  These events brought awareness to FIRST Robotics and helped solicit new sponsors and mentors for  So. California Region

WDI also graciously assigned a team to assist the FIRST Game Design Committee and produced the teaser video that announced the 2016 theme.

Well at least that explains my medevial costume.

A person does not get involved in voluntary work for credit or recognition   For me, my involvement in FIRST Robotics is about encouraging the next generation to study science, technology, engineering,  and math.  FIRST delivers on all counts.

So it was of great surprise and extreme honor to be recognized as the Volunteer of the Year at the LA FIRST Regional Competition on March 11th .   It was an exhausting year “pushing on ropes” at Disney and wrangling team mentors  for  our local FIRST teams so  I needed  that shot of peer recognition to push on.

Thank you FIRST So. California